Being in Place: The summer turned golden…. For much of it I was verging on feral, immersing myself in more wild places. Right in the middle of this, for Calan Awst/Lammas/Lughnasadh I had a Being in Place gathering at my studio in St Dogmaels: an open studio and the second installation/presentation of the Being in Place Homing Device. It was a warm and generous event, a gathering of neighbours, villagers and others from further afield. I introduced dancer Eeva Maria Mutka to the device and her response and the ensuing conversations, discussions and sharings were rich.  A local musician volunteered to have a go at the device and it was wonderful to witness how his playing transformed. There have been requests for more of these events, so new plottings are afoot….. More on Jo Shapland‘s Major Creative Wales Award here , Photos of the installation in Brighton here

Being in Place score

Told by the Wind: Last week I was back in Llanarth for a two-day initial re-rehearsal of Told by the Wind. I originally co-created this piece with Kaite O’Reilly and Phillip Zarrilli for The Llanarth Group in 2010. Since then, the performance has toured to Portugal and the US, Germany and Poland. I love returning to this piece that Phillip Zarrilli and I perform. Re-acquainting with the piece involves re-entering it in a tender and subtle way, and I feel that in return its structure holds us. Each return goes deeper.  The piece is outwardly minimal in spoken text and movement, yet there is a great deal of inner work going on, fully resonating with aesthetics of Quietude. We are all looking forward to presenting it in Huddersfield in late October, prior to our Japanese tour this coming November 2013.

The forthcoming tour to Tokyo is an exchange, interaction and collaboration between The Llanarth Group and Okamura Yojiro, Artistic Director of AMI Theatre Company, Tokyo, Japan, and members of their two companies. The exchange/interaction will include performances of The Llanarth Group’s Told by the Wind, performance of a new play by Okamura Yojiro, workshop exchanges, and planning toward a collaborative production in 2014 between the two companies.

Three performances of Told by the Wind will take place in Huddersfield 28 and 29 October 2013, prior to travelling to Tokyo. 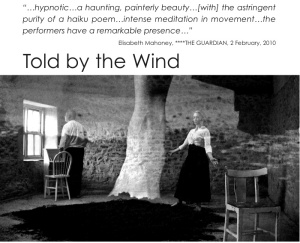 This intimate and meditative performance is a requiem for the unseen; a poignant duet across time between two figures who never physically meet…

The production is performed as part of ‘Being Here: Psychophysical Performance as Mindfulness Practice’ – a four day event at the University of Huddersfield.

This combined with the performances of Told By The Wind provide an exceptional opportunity to experience the work of Philip Zarilli – internationally known for actor training through Asian martial and meditative arts.

Posted in artwork, Being in Place, installation, music, performance